skip to main | skip to sidebar

My Favourite Piece of Plastic 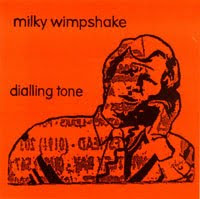 My job at the moment is really doing my head in so I was trawling through old emails looking for forgotten fun. I found this thing I wrote about 4 years ago. It may well have appeared on The Autumn Store's blog some time back then, but I can't find it on there, so maybe not.

My Favourite Piece of Plastic

It’s the ‘Dialling Tone’ 7" by Milky Wimpshake. Many records I own have their special attractions – the Helen Love single with an Xmas message scratched into one side, the Cable 7" with fish etched into the see-through vinyl, the Bearsuit single which was "mummified", the one sided Teen Anthems 7" which I bought simply because of the title "I hate oasis (and I hate the Beatles)" which came with a photocopied wrap-round sleeve and hand written labels. I’ve got record of different sizes and weights, different colours, multicoloured, glittery vinyl hand numbered sleeves, hand made sleeves, one made of denim. And so on, but the Milky Wimpshake 7" takes the prize.


Unusually for me I can’t actually remember where I got it from, I’d hazard a guess at Tempest Records in Birmingham, but there’s a chance it could have been from one of my trips to Andy’s Records in Aberystwyth. Or even, given the date of release, possibly from Mike Lloyd’s in Wolverhampton.


I can still remember why I bought it though. I had heard of Milky Wimpshake because I owned a Bette Davis and The Balconettes 7" on Slampt. At the time, I had few friends with any interest in DIY/Indie, and little access to underground gigs –being 15 and dwelling deeply in the suburbs- and, back in those days, I had no Internet access. For these reasons I frequently bought records simply because I had seen the name in a distro list, or as playing with another band, or being on the same label. Any tenuous association was worth risking my paper-round money, and more often than not it paid off.


The record came in a red paper wrap-round sleeve, which was inside a clear plastic sheath, the sleeve had black print on front and back, a bored looking executive on the front (who now I can’t help but think looks like George Dubya, even though the record was released before most of us would have known who he was), with a picture of the band sitting on a sofa on the back. Printed inside was the story about how Milky Wimpshake formed – Because Pete met a girl who’d changed her name by Deed Poll to Joey Ramone. An Insert gave the information about the record label. Ferric Mordant’s tag line was "Round bits of plastic with music on" which I loved then and love now. It seems to me to be saying "what you hold in your hands is only an object, do not idolise it, do not pretend this represents something more than you yourself could achieve, records are made by people, PEOPLE LIKE YOU!"


Then we come to the songs, ‘Dialling Tone’ Itself remains one of my favourite songs to this day, easy to dance to, lyrics that are fun, knowing, and honest ("Your boyfriend seems so dull/He was probably born in hull" and "I wanna phone you when I come home drunk, Maybe I should become a monk/ Yea I know I’m your bit on the side, but I hope some day you’ll be all mine"). It always went on compilations I made and appeared whenever I DJ’d. Including the time I said I’d play a song specially for a girl if she turned up when I was DJing, and yea, I did fancy her, and maybe her boyfriend was from hull or somewhere, but it was never meant to mean anything, it was just meant to be an ace song to be enjoyed.


The B-side "True Love Will Find You In The End/Don’t Let Our Youth Go To Waste" is a Medley of a Daniel Johnston song and a Jonathan Richman Song. At the time I had no idea who Jonathan Richman was, but it was this version of his song that made me want to find out. The lyrics slay me every single time, and the one note guitar bit, it’s like a heart beating too fast because of what is happening, or what could happen, or what is being promised. "I could give you memories to rival Berlin in the ‘30s."


It’s my favourite piece of plastic, and I often take any opportunity to tell people that.


LINKS
The links above are not just to Wikipedia or homepages. Hopefully they're to stuff that you might find a little more interesting.

I tried to fix the spacing on this post but for some reason I can't get it to word. Sorry about that.
Posted by Things at 04:24

A blog instead of a zine due my complete inability to get this thing printed. Sorry to all who agreed to be part of this, I know I promised hard copies, but I reckon this is better than nothing.